I haven’t gotten around writing up about Memories of my Melancholy Whores. I apologize to the one person who reads this blog (that would you, Rawl). So, have this instead for now.

Last night, my cousin and I were watching the original Godzilla (or Gojira, as it was known, but I’ll refer to it as Godzilla anyway). We were supposed to watch the 2014 remake after the first one, but my copy was a shitty cam rip with no subtitles. From what I heard, the remake was nothing compared to the original, although my cousin doesn’t share the same opinion. Of course, I’ve learned never to ask my cousin in opinions concerning taste. 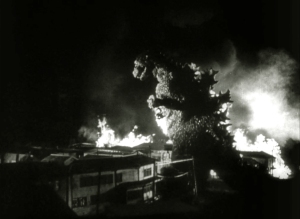 The Godzilla story is a simple one: H-bomb testing has disturbed an ancient beast’s slumber from under the sea and it is up to humanity to stop it. One man has a weapon that could destroy Godzilla but he fears that it might be misused by the greedy politicians of the world. In the end, he sacrifices himself and his work to defeat the monster. Godzilla dies, and with him, the man-made weapon that could have ended humanity.

This is where things get more complex, however. Godzilla has a simple story, yes, but it is in this simple story that director Ishiro Honda portrays many themes, chief among them would be the attitude towards weapons of mass destruction.

The stance against weapons of mass destruction is quite heavy handed in the film. Dr. Yamane (who also played the guy in Kurosawa’s Ikiru) talks about how H-bomb testing caused Godzilla to come out from the depths of the ocean to wreak havoc on Japan. Ogata compares Godzilla to the “H-bomb still hanging on our heads”. There is a scene where a lady comments about not wanting to move again, after “barely escaping Nagasaki”. I think that’s Honda’s deliberate portrayal of post-war Japan, still weary from the war yet moving on. The fact that the conversation was set on a train sort of drives home the point that Japan as a whole is moving forward, economically and metaphysically.

Then Serizawa is introduced. Serizawa has created a weapon, the Oxygen Destroyer, and it is the only thing that can destroy Godzilla. The only problem, however, is that he fears what would happen after they destroy the monster. Serizawa is afraid that people will use the Oxygen Destroyer for wicked ends and potentially end the world with it. Godzilla may not be able to destroy humanity, but if the weapon used to defeat Godzilla will, then what was the point? This is where things get interesting.

Serizawa was a veteran of the Second World War, which is where he lost his eye. He knows all too much about war, and the last thing he wants is another one. He also, like everybody else in Japan, knows exactly what an atomic bomb can do, and so fears the destructive potential of his Oxygen Destroyer, which is more powerful than any H-bomb. Serizawa was now Oppenheimer: now he is become Death. More importantly, Japan has the game changing weapon. 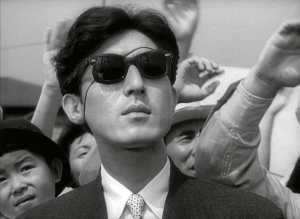 pictured: the swaggiest swagman in the entire film

How Serizawa, and in effect, how the entirety of Japan deals with its usage is important. Serizawa decides to sacrifice himself and burn his research, ensuring that nobody will be able to use the Oxygen Destroyer for any other purpose. Serizawa was only forced to use his loathsome invention after seeing the destruction and knowing that there was no other way. In effect, this was the message Honda was saying: if we had the atomic bomb, we wouldn’t drop it needlessly. We’d understand the dangers of using it, and even if it was the only way, we’d never use it for anything else.

Honda paints a different sort of reality for the Japanese; one where they had all the cards. In it, Japan had the means to fight back with a weapon so destructive it could potentially end all life if misused, but Japan, in her greater wisdom, decides to use it once and only once, and only because there was no other way. Honda paints the characters as ultimately wiser than everybody else, because they managed to open Pandora’s Box and close it afterwards. In post-war Japan, a society still reeling from the end of the war and the prospect of nuclear annihilation, this was in important message, if not the most uplifting one they could have. Honda was saying through Godzilla and Serizawa: We know the dangers and we will not succumb to the folly of other nations.

There are other themes present in the film, of course. There is a great article about how Godzilla represents tradition vs. change, how the Serizawa-Emiko-Ogata love triangle ties in closely with Godzilla and how Serizawa’s sacrifice provides a means to an end to both traditions (Godzilla requiring human sacrifice and the arranged marriage between Serizawa and Emiko). There is also Dr. Yamane’s conflict between wanting to study Godzilla and everybody else wanting to destroy it. Godzilla, after all, is a force of nature, not subservient to any sort of human convention. The only way for man to stop Godzilla was through tampering nature itself (i.e. literally destroying the oxygen), since all the other methods had no effect (electrocution, missiles, screaming). It’s interesting to note that the very reason Godzilla woke up was because man tampered with nature through hydrogen bomb testing. It’s also interesting that themes like this, about science vs. nature, are common in Japanese works (e.g. Miyazaki).

Ultimately, Godzilla wasn’t simply a message against nuclear weapons. It was also a release for the Japanese people, a sort of catharsis for the events of the Second World War and the traumatic way it suddenly ended for them. By taking the reality of the situation and reframing it as something fantastical and out-there, the Japanese were more able to cope with post-war and come to terms with what exactly just happened.